Driving a long commute in traffic can sound like a nightmare, but for BDB VP Shereena Coleman, it was a breeze. On October 30, the executive boarded the Brightline in West Palm Beach to attend Unbound Miami located in downtown Miami. She represented the Business Development Board of Palm Beach County on a panel with Greater Fort Lauderdale Alliance, Miami-Dade Beacon Council, and Enterprise Florida. The topic for the panel was “Tri-County Collaboration”, which sparked quite a few topics of discussion. 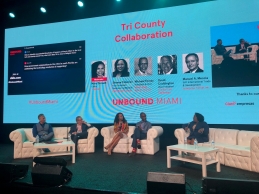 Amazon: Amazon HQ2 is one of the largest projects known in economic development and will create 50,000 high-paying jobs. It’s important to note that in addition to this direct impact, Amazon HQ2 will create thousands of additional jobs and billions of dollars in additional investment in the surrounding communities of where this second headquarters will be located. Miami-Dade, Broward, and Palm Beach counties partnered on submitting a proposal to Amazon, which landed Miami in the top 10 possible locations. Together, we all win in South Florida.

Talent: South Florida has access to 6.5 million potential consumers and employees. It’s also home to a new high-speed rail system, the Brightline. It can simply transport talent between downtown Miami, Fort Lauderdale, and West Palm Beach in under an hour.

Simply put, South Florida is the place to be. We have the talent, technology and tools for any company to succeed.